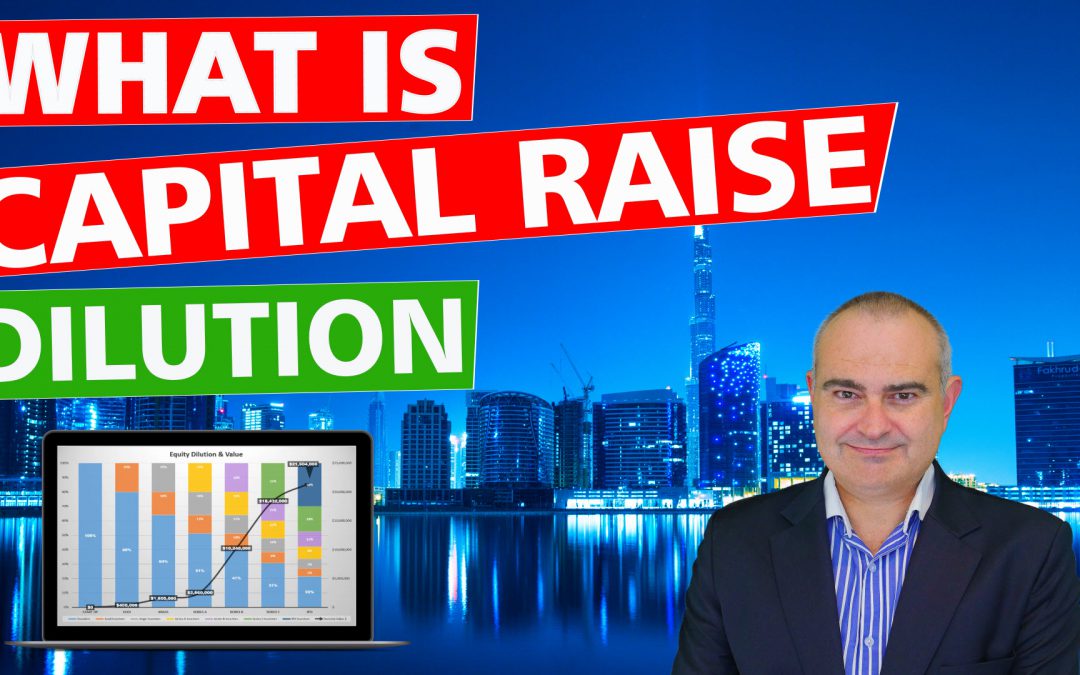 Capital raise dilution and founder equity is commonly misunderstood, getting it wrong can kill investment, restrict your growth and get you kicked out of your own company. It’s where you as a founder exchange equity in your company for cash that you can invest in the business.

You’re going to get diluted the only real question is by how much, which is completely dependent on the amount you are raising and your ability to justify your “perceived valuation”, and the “real valuation” accepted by an investor. For first-time founders this is a new hurdle that requires understanding and planning.

A common problem is founders trying to maintain the maximum amount of equity, this is an incorrect approach because cash is the most valuable resource a startup company can have. Usually this is due to a lack of understanding that all shareholders dilute in all rounds besides the first round. Equity is from the company as a whole not the founders equity position.

In Venture Capital rounds this may not be the case but for this explanation we are taking a simple view.

You must be prepared to exchange equity for cash. Now when I say this I say this within limits, you don’t want to be handing over more than 35% of your company in any round other than an IPO.

So let’s assume you’re the sole founder in the company and you need to raise capital, so what’s going to be a reasonable amount of equity dilution?
In my experience it’s reasonable to be handing over anything from 10% to 25% per investment round, in an IPO it can be 30% to 50%.
As long as it’s less than 25% in each capital raise round you should not be too concerned.

Now consider that prior investors are also diluting and your value is increasing in each round, so you’re not giving up as much as you might think.
This is where most founders get it wrong, its the dilution maths, so here’s the common miscalculation.

The company exchanges 25% company equity in three separate rounds of capital raising, then I’m only left with 25% of my company.
Incorrect, you actually have 42.19% equity remaining after three rounds.

Why, because 25% is not from your equity, its from the company as a whole and all prior investors dilute which means you dilute less in each subsequent round.

Now let’s look at another example.

Company “XYZ” has an online platform with software development six months from completion, they need cash to stay on track and avert a disaster.
So the valuation has to be realistic, otherwise it’s going be a really hard sell, investors hate overvalued companies and will deeply questioning your financials.
At this point it’s important you consider the end game which is your final equity position and exit value.

To estimate simple scenarios on equity dilution and value in every investment round from seed to IPO, or if you hate maths like me download the
“Capital Raising Dilution And Value Calculator”.

These are the starting values in the spreadsheet…

You can change “Capital Raise” amount and “Pre Money Value” to suit your own circumstances.

In the chart view, its easier to see the decreasing Founder dilution and increasing value. 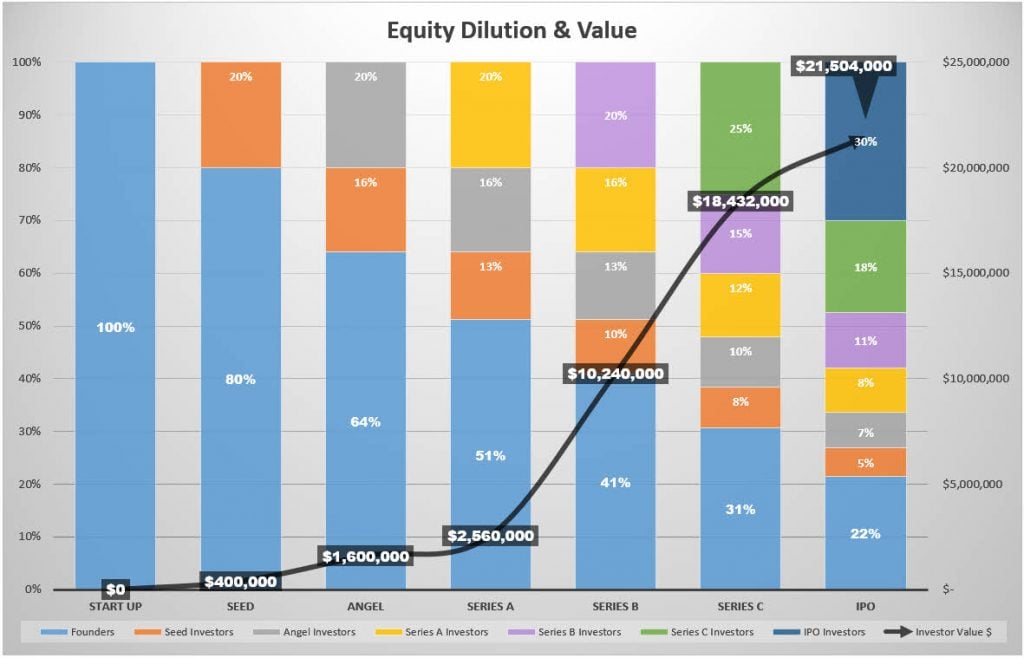 NOTE: After the IPO round Founders @ 21.5% and $21,504,000
In fact in the last round although the company as a whole diluted 30% the founder only diluted 9%
That’s the impact of equal equity dilution across all shareholders

So diluting your equity position when capital raising is a completely normal thing.

Again it’s important to understand your looking at the endgame here, focus on your final equity position and exit value. That end game when the company valuation is enormous is where you’re actually going to make your money.

Remember have the end game in sight, don’t get greedy and don’t be afraid to give up equity, you’re going to have to do it to raise capital for company growth.

The gender pay gap is well documented: women make about 80 cents for every dollar that a man earns. Less well known: the gender investment gap. According to our research, when women business owners pitch their ideas to investors for early-stage capital, they receive significantly less—a disparity that averages more than $1 million—than men. Yet businesses founded by women ultimately deliver higher revenue—more than twice as much per dollar invested—than those founded by men, making women-owned companies better investments for financial backers.

BCG recently partnered with MassChallenge, a US-based global network of accelerators that offers startup businesses access to mentors, industry experts, and other resources. Since its founding in 2010, MassChallenge has backed more than 1,500 businesses, which have raised more than $3 billion in funding and created more than 80,000 jobs. MassChallenge, which neither provides financial support nor takes equity in the businesses it works with, puts significant effort into supporting women entrepreneurs.

Our objective was to see how companies founded by women differ from those founded by men. Our data shows a clear gender gap in new-business funding. We also spoke with investors and women business owners to get a sense of how they perceive the funding status quo. Our findings have clear implications for investors, startup accelerators, and women entrepreneurs seeking backers.

One might think that gender plays no role in the realm of investing in early-stage companies. Investors make calculated decisions that are—or should be—based on business plans and projections. Moreover, a growing body of evidence shows that organizations with a higher percentage of women in leadership roles outperform male-dominated companies. (See “How Diverse Leadership Teams Boost Innovation,” BCG article, January 2018.) Unfortunately, however, women-owned companies don’t get the same level of financial backing as those founded by men.

To determine the scope of the funding gap, BCG turned to the detailed data MassChallenge has collected on the startup organizations it has worked with. About 42% of all MassChallenge-accelerated businesses—of all types and in all locations—have had at least one female founder. Aiming to build on the growing proportion of women entrepreneurs, the availability of education and support for them, and the sizable community of women who are business experts, MassChallenge determined that it needed to learn more about how its women entrepreneurs were faring and how the program could better prepare them for future success.

In a review of five years of investment and revenue data, the gender-focused analysis showed a clear funding gap (see the exhibit).

The findings are statistically significant, and we ruled out factors that could have affected investment amounts, such as education levels of the entrepreneurs and the quality of their pitches. (See the sidebar, “A Closer Look at the Data.”)

A CLOSER LOOK AT THE DATA

The results, although disappointing, are not surprising. According to PitchBook Data, since the beginning of 2016, companies with women founders have received only 4.4% of venture capital (VC) deals, and those companies have garnered only about 2% of all capital invested.

To dig deeper, we spoke to women founders, business mentors, and investors, some of whom were not affiliated with MassChallenge. From those conversations, three explanations emerged.

One, more than men, women founders and their presentations are subject to challenges and pushback. For example, more women report being asked during their presentations to establish that they understand basic technical knowledge. And often, investors simply presume that the women founders don’t have that knowledge. One woman who cofounded a business with a male partner told us, “When I pitch with him, they always assume he knows the technology, so they ask him all the technical questions.” We heard that when they are making their pitches, women founders also hesitate to respond directly to criticism. If a potential funder makes negative comments about aspects of a woman’s pitch, rather than disagree with the investor and argue her case, she is more likely than a man to accept it as legitimate feedback. “Most guys will come back at you in those situations,” an investor said. “They’ll say, ‘You’re wrong and here’s why.’”

Two, male founders are more likely to make bold projections and assumptions in their pitches. One investor told us, “Men often overpitch and oversell.” Women, by contrast, are generally more conservative in their projections and may simply be asking for less than men.

Three, many male investors have little familiarity with the products and services that women-founded businesses market to other women. According to Crunchbase, which tracks VC funding, 92% of partners at the biggest VC firms in the US are men. “In general, women often come up with ideas that they have experience with,” one investor said. “That’s less true with men.” Many of the female interviewees told us that their offerings—in categories such as childcare or beauty—had been created on the basis of personal experience and that they had struggled to get male investors to understand the need or see the potential value of their ideas. One founder told us that this lack of understanding shows up also in terms of social class when entrepreneurs pitch products for people at socioeconomic levels significantly lower than that of the typical angel or VC investor. 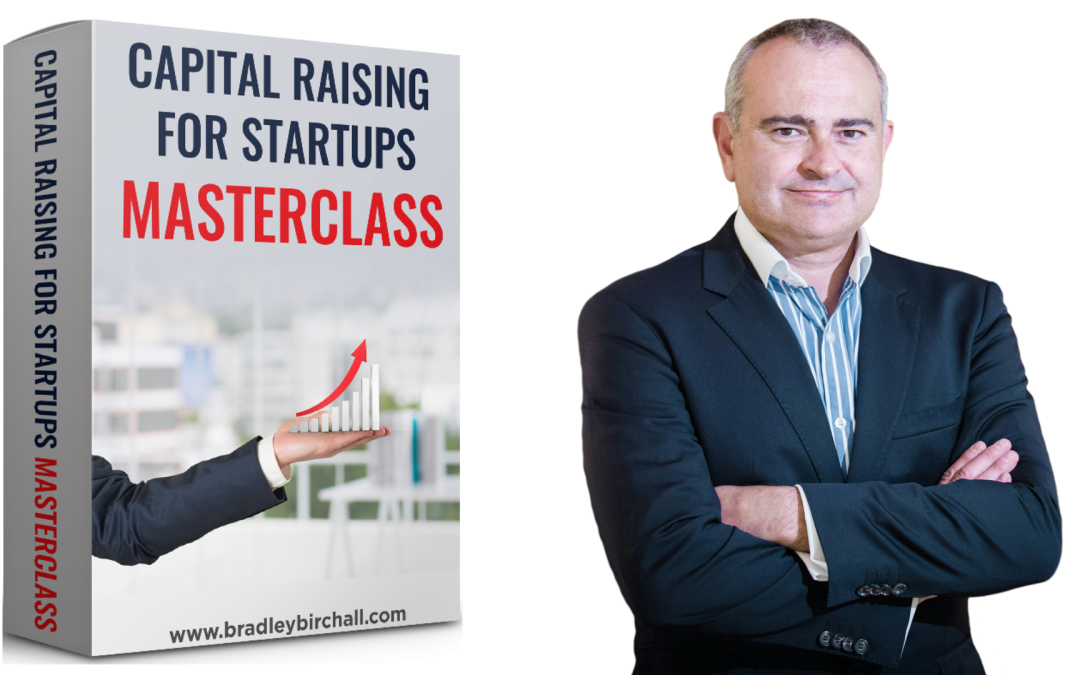 It’s been a long time in the making… and well my dog ate the script but its finally here.

A distillation of my startup and capital raising experiences into an online Capital Raising For Startups Video Masterclass for early phase startups. Unfortunately fresh entrepreneurs just don’t get access to my sort of knowledge.

So if you’re an entrepreneur or you know a startup that could benefit, help me help the startup community and point them to this! 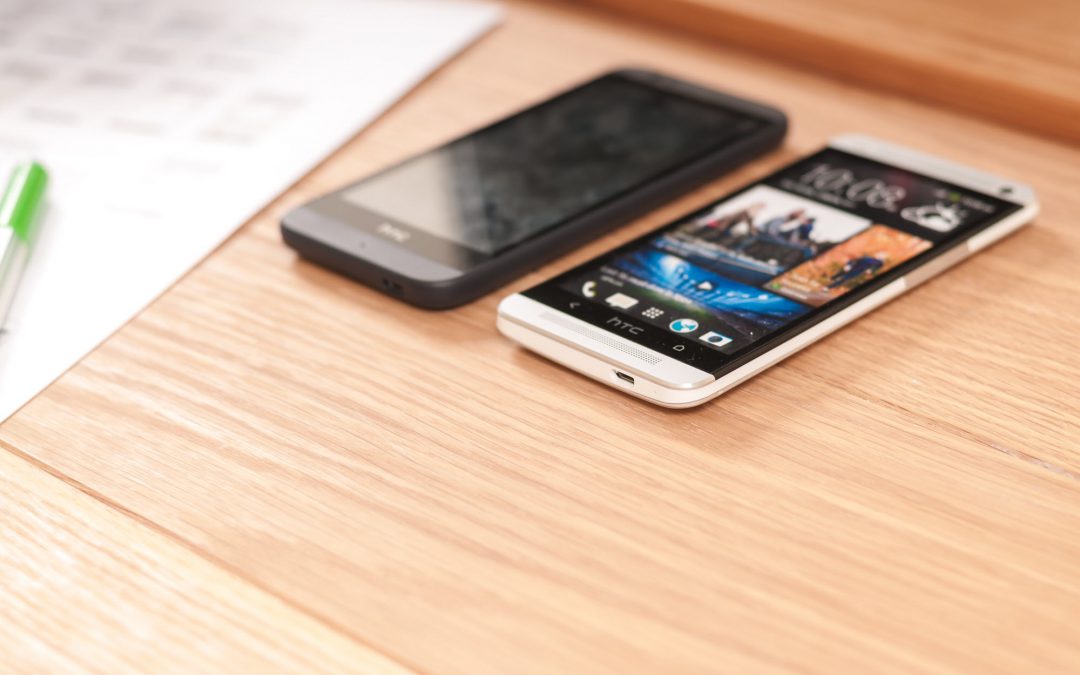 What can busking teach us about bootstrapping a startup? If you ask Bridget Harris, the two experiences aren’t so different. Bridget, who in a previous life was could be found busking in London’s Covent Garden and in tube stations, is the co-founder and CEO of You Can Book Me.